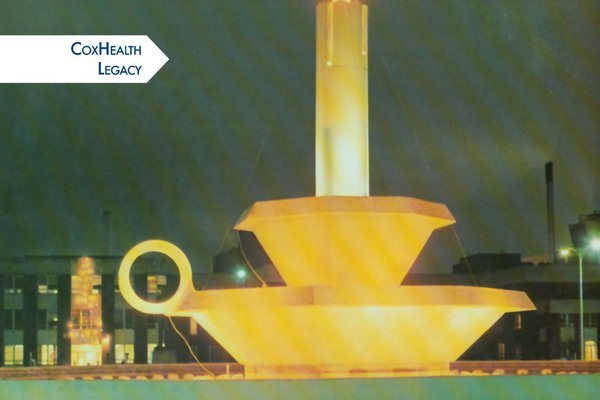 CoxHealth caregivers continually strive to brighten patients’ lives through their care and compassion. Years ago, however, the health system shone in a literal way as well:  Through a giant candle, built atop one of the famed fountains.at today's Cox North.

The larger-than-life Christmas decoration is believed to have debuted in 1967, and was the brainchild of Forrest Johnson, an engineer at Burge-Protestant Hospital (today's CoxHealth). Although Johnson no longer works with the health system, employees remember him and the story of how the decoration came to be.

“He told me that one time, he turned around and just pictured a candle (when he saw the fountain),” says Stevan Battles, a longtime Engineering supervisor with CoxHealth.

After “seeing” the fountain as a candle, Johnson proposed an idea: After the fountain was drained of its water for the winter, why not build a candle to display on top of it? The idea was approved – both by staff, and by the late Lester E. Cox, longtime chairman of Burge, who donated the fountain.

Johnson then became a candlemaker. Work on the display was done at the hospital, and was a team effort.

“He came up with the idea, but the Engineering department helped him build it,” says Battles.

“The candle is made of sheet metal and stands 12 feet tall,” notes a 1967 Burge Booster, a hospital publication from the past. “The flame is made of fiberglass, is three feet high, and holds a 400-watt bulb. The handle was made of plywood and metal. (The candle drippings were also made of metal.) A very special salute goes to Mr. Johnson for the many hours of hard work he put into building one of Springfield’s most attractive outdoor Christmas decorations.”

Its presence even made the front page of a Springfield newspaper.

“Tonight this tall candle will burn in front of Burge-Protestant Hospital, a symbol of faith and a beacon of hope in the Christmas season,” the Sunday News and Leader printed on Christmas Eve in 1967. “So strikingly authentic does the candle holder and candle appear to viewers that a thinking adjustment must be made to realize how large it is."

According to Battles, the candle was displayed through the early 1980s -- and was one of his first connections with CoxHealth after moving to Springfield.

“I came by here one night, and I thought it was great,” says Battles, who has now worked with the health system for decades. “It looked just like something you carried around in the 1800s.”