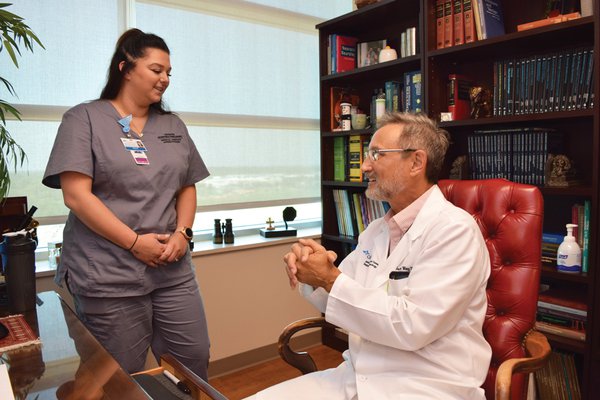 When CoxHealth launched an accelerated MA program in partnership with OTC, employees were ready to take on the challenge. The program covers tuition and it pays employees full-time wages as they study. In exchange, graduates commit to three years of service. Here is what three new grads had to say about the chance to advance their careers.

Ka Hang says of all the things the medical assisting program has taught her, it's what she has learned about herself that is most important.

"Getting to go through this program has shown me I am meant for this," she says. "I have chosen something I love to do. To be there for someone in their lives."

She loves training in the classroom and then applying what she has learned in hands-on work in the clinics.

"Not a lot of programs have students going out and doing what they learn in class," she says. "It helps with taking it all in."

Hang had always thought about becoming a nurse.

She came to Springfield for school, but between work and family, it was tough to find the time for studying.

"I took a break from school, and a break turned into five years," she says.

She was working as a medical secretary at Ferrell-Duncan Clinic when she heard about the program. She had originally applied at CoxHealth because of its reputation.

"People here go out of their way for patients, whether it is taking patients out to a car or just having a listening ear," she says. "I knew CoxHealth is known for giving back, to patients and the community."

"This is awesome. If it wasn't for this program, I might never have gotten back on this path," she says. "It is hard to go to work and continue your education. This came at a good time."

Ultimately, she would like to build a career in internal medicine.

"It is a field where I can grow. If there is a bridge from medical assisting to LPN, that would be my goal. This is giving me the opportunity to pursue my dreams."

At the holidays a few years ago, she and a friend were talking about their ideal jobs. DeMoure floated a suggestion: Maybe something where she could watch Christmas movies?

She was in luck. Her friend worked at Northside Pediatrics, where she could work with kids and there might be an occasional Christmas movie on in the lobby. There was a job opening and DeMoure applied. She was hooked, and serious about a future dedicated to patients.

"I love the interaction with patients and parents," she says. "I still have babies here whose parents will hand them to me. Like my baby BFFs. I get to hold them and love them, it's awesome."

In the three years she worked at Northside Pediatrics, she had considered going back to school. With a husband in the military and two children at home, the chances of making that happen while holding a full-time job seemed slim.

Then, the medical assisting partnership was announced.

"My manager pulled me aside and said, 'you would be great at this,'" she says.

It was the perfect opportunity. She jumped in and hasn't looked back.

"The instructors are amazing. There is an astronomical amount of knowledge and tools you get just in the first week," she says. "It is a lot of pressure to prepare you to get you into a clinic as quickly and safely as possible, but it's worth every minute."

She has seen things she never thought she would see: treatment of basal cell carcinomas, prostate biopsies, suture removal, port removals and more.

"This is invaluable. I have never heard of a company offering something like this," she says.

In the future, DeMoure is considering a pathway to nursing.

"These are all opportunities waiting for me, thanks to CoxHealth," she says. "There is no better way to grow a company than from the inside. I came here and fell in love with CoxHealth. I'm here for the long haul."

Kelly Brethorst used to drive by Cox South every day on her way to her previous job. It was a job with no benefits, and she thought to herself: I wonder what CoxHealth has to offer.

Then she found a job posting for a surgery scheduler and applied. Her mom had gone through treatment for cancer and she had seen firsthand how health care staff can make a difference.

"I wanted to be that person for a patient. I wanted to make a scary event easier for someone," she says.

She was hired for the scheduling job, and instantly she knew she was in the right place.

"I've seen nothing but great things as a patient and now as a worker. I'm grateful to be a part of the change and growth."

Her supervisor urged her to look into the MA program. The idea of completing a nine-month program in only 16 weeks was daunting.

"I was so scared at first. But, I ran toward what made me scared and I let that fuel my fire."

The class learned to lean on each other as they worked through class work and training in clinics.

Brethorst especially liked her time in Neurology (above with Dr. George Wong), Cardiology and Senior Health.

"All the doctors love students, and they love teaching," she says.

Now, as a new graduate, Brethorst says that she originally looked at CoxHealth for the benefits, she got so much more.

"It means the world that CoxHealth thinks about the future. It's nice they believed in us. I'm so glad I took the opportunity to better myself for my family and my future."