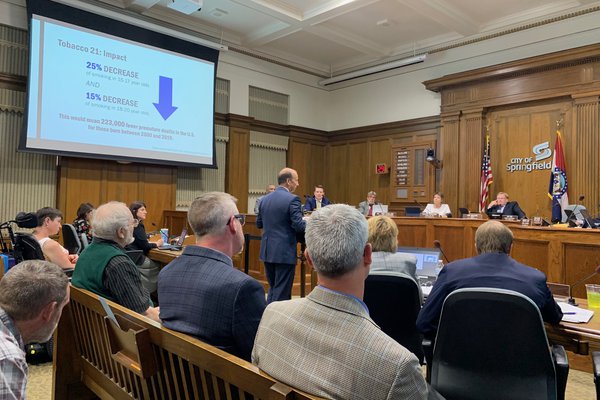 Steve Edwards, president and CEO of CoxHealth, spoke at the Springfield City Council meeting on June 16 in favor of Tobacco 21. If approved, the initiative will change the age individuals could purchase tobacco in the city of Springfield to 21. Here are the remarks he prepared to share with council members:

Mr. Mayor and members of council, thank you for this opportunity to address you.

My name is Steve Edwards, and I serve as president and CEO of CoxHealth. We have 12,100 employees, and we are aligned and dedicated to a common mission: "To improving the health of the communities we serve."

In line with this, I believe there is no more important measure supporting our mission coming before our city than Tobacco 21. I am compelled to support it.

We are also in the midst of the greatest surge in new teen tobacco use. JUUL, an electronic cigarette company established on May 22, 2015, is now worth $38 Billion.  $0 to $38 Billion in 4 years, and generating revenue chiefly by preying on children.

Some may say if you can send a kid to war, they should have the right to buy tobacco.  I know this argument, and I can even imagine my father, at one point in his life, making this argument. But not today.

Not today, because he is not here. He died of a brain tumor after a lifetime of smoking addiction. He didn’t start smoking and then die a year later; he started as a teenager, and his addiction was cemented when he served the United States Army in the Korean War. They gave soldiers free cigarettes in those days -- a great marketing campaign.

I will always remember my last lucid conversation with him. He was near the end of his fight with brain cancer, and he asked me to wheel him out of the hospital to smoke. He looked like a skeleton having lost half his body weight, skin turned gray, shaved head and paralyzed on one side. When he finished his cigarette, shivering and almost ashamed, he said to me, “You should wheel me to the circus so I can be in the freak show, to show kids what tobacco does to you.”

Tobacco is methodical predator, a serial killer, with maniacal patience. If it killed us right away, like a heroin overdose, we would ban them from the face of the earth. But they stalk us for decades, and in the end, they always get their prey.

I speak to you as a health care president, but perhaps more importantly as just a father -- a father of three teenagers, who never met their grandfather -- and my most important job is to protect them.

I pray you will support Tobacco 21.