A changing approach in the battle with C.Diff 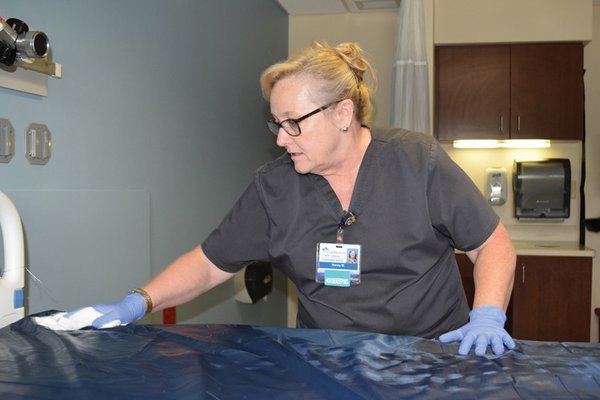 When Branson leaders served a celebration breakfast this summer, there was a definite purpose for the pancakes. The meal marked a 60-day streak with no cases of hospital-onset C.diff, a dangerous bacteria that can cause severe diarrhea and potentially life-threatening inflammation of the colon.

“That was definitely reason to celebrate,” says Dana Edwards, infection prevention coordinator at Cox Branson. “That streak, which ended up going 79 days, gave us confidence that our initiative was working.”

The initiative, known as “Test Smarter, Treat Better,” began last fall when Edwards and Matt Farmer, director of Branson’s ED, and a multidisciplinary team began brainstorming ways to get a handle on the Clostridium difficile bacteria.

The bacteria are common and hospital-onset infections are closely tracked and reported by Infection Prevention. Even with previous efforts to reduce C.diff cases, the rates were still higher than leaders expected.

The team examined the data and had a recommendation: What if staff took a step back, looked at each potential case and determined if it was a good candidate for a laboratory test?

C.diff is tricky: Many people carry the bug in their bodies, but that doesn’t always mean they are infected and need treatment. If a patient has diarrhea, it could be due to any number of causes. Finding C.diff in a lab test doesn’t always mean it is the cause of illness, and it doesn’t mean C.diff was acquired in the hospital.

It is easy for over testing to skew reported rates. That’s why the team’s goal was to identify patients with the highest likelihood of true infection before testing them.

“We want to test appropriately for C.diff, so our rate is accurate to actual infections,” Edwards says. “We want to report true numbers, not people who are coming into the hospital with C.diff, or patients who are colonized but not infected.”

To cut down on unnecessary tests and treatments, the team enacted an intervention called a “Charge Nurse Hard Stop.”

“Basically, before a specimen could be sent to lab, it has to be cleared with the charge nurse and meet certain criteria before testing,” Farmer explains.

Staff members do a hard stop and ask if the patient has a known history of C.diff or a known cause of loose stool.

● Is the patient currently being treated for C.diff?

● Are we checking for cure? If a patient has been treated for C.diff, it is not best practice to test to see if it is cleared, since the test doesn’t distinguish between infection and colonization.

● Is the test being conducted within the first three days of a hospital stay? After that time, a positive test will count as hospital-acquired, even if the patient had the bacteria when he or she arrived. Testing sooner also benefits patients, as they get treated more quickly if an infection is present.

During the hard stop, the charge nurse reviews the chart, looking at medications and recent history. They also ensure diarrhea is documented. These checks ensure a test for C.diff is warranted and that patients with highest likelihood of infection are tested and treated.

Edwards says getting the hard stop adopted into protocol took teamwork, communication and support from senior leadership. It also required a lot of education.

Education included a focus on personal protective equipment (PPE). Physicians, staff and volunteers learned how to identify isolation rooms and the appropriate PPE to use. Departments like Lab, Respiratory Therapy and Radiology performed real-time audits, ensuring staff were applying what was learned.

“We are pleased to report that after implementation of the hard stop, we’ve seen a 70 percent reduction in our hospital-onset C.diff rates,” Farmer says.

The team will soon share their work with a national audience. Surveyors from DNV were on campus when the streak was at day 48. They were so impressed, they encouraged Edwards and Farmer to present at the DNV Symposium in Denver in October.

“We’re excited to share our findings with professionals across the country to show that a small group can make a big difference when they set their minds to making a change,” Edwards says.