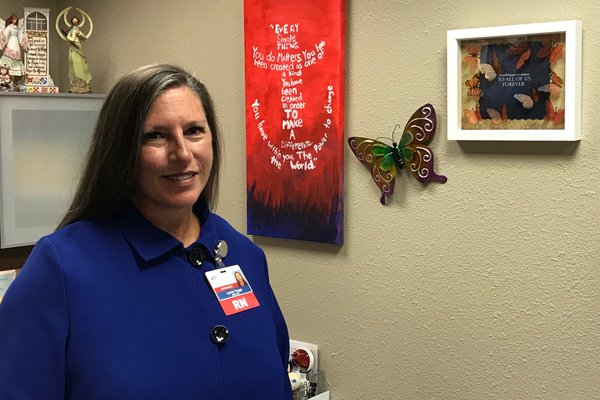 As the sun sets over Cox Branson each evening, a glimmer of fleeting daylight shines on a painting of a butterfly in the office of Vice President Lynne Yaggy – an image that’s become a symbol of her leadership philosophy after almost 40 years in healthcare.

“The Butterfly Effect is an idea that small change can make much bigger changes happen,” explains Yaggy, chief nurse and VP of Clinical Services. “I don’t think nurses understand the lasting effect they have on patients, family or peers with their interactions.”

It was the butterfly effect from nurses – good and bad – that influenced Yaggy’s leadership in the first place. Her journey at CoxHealth includes a little bit of happenstance, a lot of dedication and an emotional journey with two-pound twins who molded her into the person she is today.

Yaggy is unapologetic about being a firm but loving leader who always puts the needs of patients first. She walks with purpose – the unmistakable cadence of her high heels traveling down long halls as she makes sure staff is pushing the bar to be its best. However, when her career began, her focus was a different bar -- the bar exam.

“I always wanted to be an attorney,” she explains. “So, I took a job as a receptionist at Cox North to pay my way through school. I didn’t realize it at the time, but that job would change my entire course.”

That was in May of 1981 when Cox North was a trauma center in Springfield. Yaggy saw all sorts of cases come through the door and remembers the calm demeanor of the nurses there. “Nothing ever rattled them,” she says. “They treated everyone with respect and it was so inspiring to watch.”

That insight left her conflicted about her career choice. “I wanted to be a lawyer, but I loved what I was seeing in the ER. I thought the nurses I worked with were the smartest people I’d ever met and I wanted to be just like them.”

So, when a friend from high school, who also worked at the ER, suggested they go to nursing school, new plans began to take place. Yaggy began second-guessing the business classes she was taking, calling them “cutthroat” and “counterintuitive” to what she really wanted to do. She was two years in at Drury University but decided to take a break. She went to work in hospital public relations next to the Burge School of Nursing where a special “butterfly” solidified her future plans.

“I met Miss Mary Ruth Cuddy who was over the school that would later become Cox College,” she says. “She was like the Florence Nightingale of Burge School of Nursing. She encouraged me to go to nursing school, so that’s what I did.”

Yaggy graduated nursing school in 1991 and was pregnant with twins a year later. That’s when life’s trials shifted her focus from being a bedside nurse to aspirations of a more administrative role.

The babies were born at 28 weeks and spent four months in the NICU. “I began to notice the care we received was centered on the staff and not always what was best for our family,” she says. “When we saw all the tubes coming out of our son and daughter who were only two-and-a-half pounds, the nurse casually said, ‘Do you have any questions?’ In the moment, the nurse’s words and actions felt cold and impersonal to the grieving family.

“It made me want to fight for the kind of care I know families deserve,” she says.

The twins were transferred to MU where more “butterflies” would influence Yaggy’s journey to leadership. “I remember it was an older hospital that wasn’t very fancy,” she says. “But, the kindness and care we received was exceptional. I will never forget those nurses and the impact they had on me and my family.”

In the days that followed, it was touch-and-go with the twins’ health. “There were many times we didn’t know if our son would survive,” she says with a pause as she regains composure. “Going through that made me realize why I became a nurse. I wasn’t in leadership at the time, but I knew I wanted to be. I needed to push the bar and set expectations for care.”

That fire to make things right for patients and their families ignited a trail she would blaze through the system over the next few decades – taking her from frontline nurse to a director of nursing position.

“When I got to blend the business side of healthcare with my nursing knowledge, that’s when I knew leadership was right for me. I just kept reminding myself what kind of care I craved as a patient and family and that’s the excellence I expect from our team.”

When CoxHealth acquired Skaggs Regional Medical Center in 2013, Yaggy moved to the Branson campus to become the medical center’s chief nurse and VP of clinical services. “I love the friendliness and sense of family at the Branson hospital. The community is a very important thread in the fabric of this campus,” she says. “I am so proud of the teamwork that goes into providing care to our patients.”

Yaggy smiles when asked about her wisdom and advice she has for new nurses who might be wondering if leadership is right for them. “If you give 150 percent in everything you do, it’s easier to get noticed. Find someone you want to be like professionally and allow them to mentor you. If you’re driven and coachable, doors will start to open, but you have to walk through them.”

Yaggy’s CoxHealth colleague Vicki Hockensmith gave her the book “The Butterfly Effect” more than a decade ago to remind her of the reach she has as a mentor. Yaggy still shares the book with new staff and volunteers to help illustrate the big difference they will make in the lives of patients and their families.

Yaggy and her husband Bernie have three grown children, including the twins who are now 27 years old and a 25 year old daughter. When the time comes to retire, she hopes the flutter of her own wings continues to help grow new nurses into confident leaders across the CoxHealth system.

“I hope my legacy is that I’ve done my part to -- not only impact their future as a leader-- but to install the importance of teamwork,” she says. “I hope they’ll look back on their time with me and understand the importance of unity – the idea that when we all row in the same direction, we can go to incredible places.”